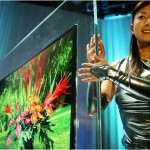 Twitter is adding a new dimension to television. Watching TV whilst tweeting is like listening to live commentary. It also turns a solitary pastime like watching TV into a communcal one, and you get to have your say. It is time Twitter was incorporated into plasma TVs for same-screen action and TV audiences for political debates include the Twitter brigade.