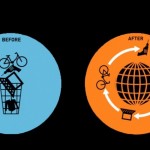 I have mentioned some of these sites before, such as NeighborGoods, ShareSomeSugar and Swap, in previous posts, but this is a trend that must be taken seriously. Rachel Botsman and Roo Rogers have shared an extremely insightful view of how we are moving towards a world of sharing and renting, as opposed to owning (‘What’s Mine is Yours’ – well worth reading). It is changing a mind-set started in the 1950s of hyper-consumerism, where all our ills were swept under the carpet with just another purchase. So the old community activities and sharing were quietly eased out of the picture as we focused on number one (me, me, me). Technology is facilitating change and allowing cool sites such as ZipCar, Freecycle, thredUP, Ecomodo, Landshare and CouchSurfing to bring together people with a specific need (ie. somewhere to stay during a trip overseas) with those that have something to share (ie. a spare couch for travellers). What is most pleasing is that hard working people who gave up their leisure time and hobbies so that they could afford bigger houses and cars are now utilising the benefits of technology to claw back some of that valuable time. Back in the depression of the 1930s, President Roosevelt in the US shut down the country’s banks for a week, and many stores and practitioners were paid not in cash, but in home-grown groceries, batteries, oil and tobacco. Whilst we may not be heading back to the 30s, technology is helping to drive new thinking, where we don’t need to own a physical CD to listen to music, don’t want the DVD but want the movie; in other words, we want not the physical goods but the experience. Here is another, very relevant, quote from Bill McKibben, from his book Deep Economy: “For most of human history, the two birds ‘More’ and ‘Better’ roosted on the same branch. You could toss one stone and hope to hit them both. Now you’ve got the stone of your own life, or your own society, gripped in your hand, you have to choose between. It’s More or Better.” I like that.