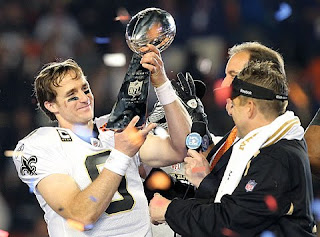 I was fortunate enough to be in the US last weekend, and really enjoyed Super Bowl XLIV.
There was as much buzz around the half-time commercials as the game itself. Some 100 million people saw the game (and the ads), but 40 million or so also watched the ads online. With so much creativity at play, led by Bud Light, GoDaddy and E-trade, the ads have been circulating the social networking sites all week. Domain name business GoDaddy have attributed most of their growth to the Super Bowl and many of the advertisers have been relying on their Facebook and Twitter fans to spread the message. It’s all about impact and the key is getting consumers creating the buzz through social media – it spreads so quickly and of course it’s free. But ads aside, well done to Drew Brees and the Saints on their first Super Bowl.